Leclerc has been producing versions of the Fanny 4 shaft counterbalance loom from the early 1950s. I began as a modified version of the "Mira" or "M" type loom and was originally called the "F" type because the folding back beam. The F-type became the "Fanny" and later became the "Fanny II". It is one of Leclerc's most popular floor looms with thousands in use worldwide. 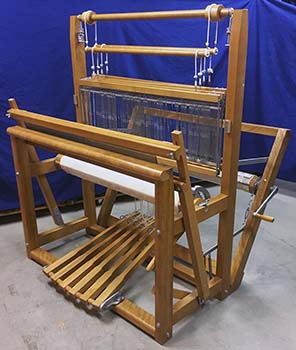 Prior to 1955 when Leclerc introduced their first jack floor loom and called it the "Nilus" after the owner "Nilus Leclerc" their looms were described by their function (ie. "Floor Loom", "Table Loom", "Double Loom", etc.) and were just given a letter. For that reason the new Leclerc loom design based on the "M" type loom but with a folding back beam was referred to as the "F" type.

The first mention we have of this new loom is from around 1951 (no mention of it in the 1949 and 1950 brochures and price lists) and talks about the advantages of the "Movable Folding Loom". In 1957 Leclerc expanded their new naming scheme to cover all their looms and began referring to the "M" type loom as the "Mira" and the "F" type as the "Fanny". In 2000 Leclerc introduced a version of the loom with an integral shed regulator and a number of other changes, calling it the "Fanny II". 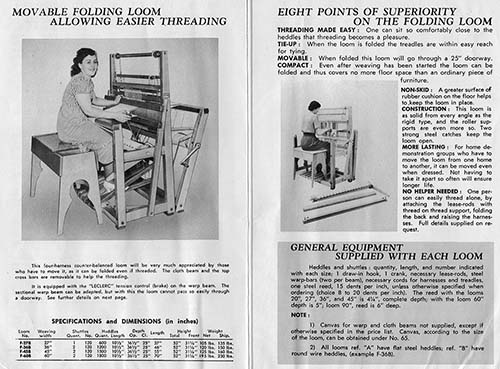 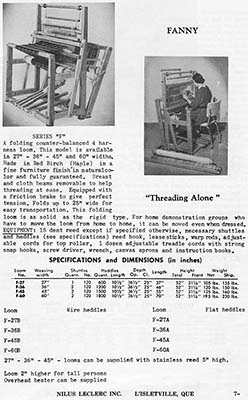 This document describes some of the changes in the design over the year that may help owners determine the year of manufacture. Note that some looms will have been upgraded to the new features over the years so their presence on a loom my not indicate the actual age. Sometimes holes in the frame from removed parts can help identify what the loom was configured with when originally purchased.

Since we don't have a complete source of information on when the various changes were made, we have relied on our collection of Leclerc catalogs, price lists and other documentation as well as pictures Leclerc loom owners have sent us or we have found on the Internet over the years. We greatly appreciate receiving any pictures or documentation that help fill in the blanks or correct information we have posted. We can be contacted by email at nmanners@camillavalleyfarm.com.

Below are some of the identifying features that have changed the loom over the years. Note that clicking on the pictures will show a larger version which will often also have more information.

The Leclerc logo on looms has changed over the years to reflect the company's changing name and the name of the location it is based in. The logo on a Fanny or F-type is normally found on either side of the loom on the outside of the vertical castle. Some looms will say "Leclerc" and some will say "Nilus Leclerc". The first two logos do not apply to the Fanny or F-Type as they pre-date this model.

The easiest way to identify the age of a loom would be by looking at it's serial number. Unfortunately though with Leclerc looms that is not always an option for a number of reasons.

While we believe the company always put some kind of information on the looms, other than the loom model, any other information was inconsistent over the years. Different formats were used and as far as we can tell records were not maintained indicating what the numbers and letters meant. Early models had a number stamped into the wood frame somewhere but there were often other numbers, probably identifying specific wooden parts that were common to other models which confused things.

Later on, Leclerc started putting stickers with some information on the looms but the stickers could come off over time. Some stickers were placed on removable parts of the loom could accidentally be switched with another Leclerc loom if they were taken apart and stored together.

Below are some of the ways Leclerc Fanny looms were labeled:

We know of 5 distinct braking systems on the Fanny type looms over the years. Clicking on the pictures below will show larger pictures of the complete brake systems.

Over the years Leclerc changed the way the upper roller attached to the sides of the looms.

A number of other changes in the loom design have occurred over the years that may help identify the looms age:

Check out our Manual Section for downloadable assembly instructions for this and other Leclerc looms and weaving accessories. Information is also provided on upgrades and accessories. If you are not sure which Leclerc loom you own see our Leclerc Loom Guide to help identify the model.