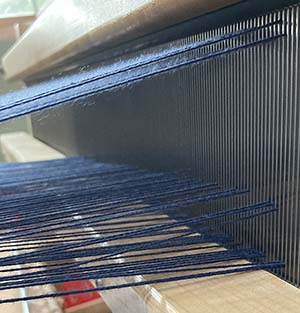 Floating Shafts are something that can sometimes occur on Jack looms, most often on Multishaft looms (ie. greater that 4 shafts) when complex patterns are being woven. When a treadle is depressed, in addition to the desired shafts fully rising, another shaft partially rises, seemingly on it's own, making the bottom of the shed uneven and hard to throw a shuttle through. Countermarch and Counterbalance looms don't experience this problem as the shafts not being raised are pulled down by the shedding mechanism.

The simple solution is for the weaver to reach out and push the misbehaving shaft back down before throwing the shuttle but Leclerc looms provide a better way with dealing with this problem. This can be frustrating to the weaver as it doesn't seem to make sense and it is important to see why this is happening to understand how it is fixed.

The picture to the left shows the parts of the jack loom mechanism. The treadle at the bottom when depressed pulls down on the Treadle cord connected to the Lam. When the Lam is pulled down, it causes the Jack to expand upwards on either side raising the Shaft.

There are 4 main forces acting on a jack loom shaft and the sum of these forces determines whether the shaft rises or falls:

The "Shaft Weight" is constant downward force. The "Warp Tension" downward force slowly increases as the shaft rises higher and the "Treadle Weight" would appear to be a constant. With the only shaft-lifting" force to change being the one the weaver applies by depressing the treadle, the question is why a shaft not connected to the treadle being depressed would suddenly rise? The answer is simply that the "Treadle Weight" force is not actually constant.

To produce the more complex patterns woven on multi-shaft looms it is common for multiple treadles to be attached to a single shaft. These treadles can also be attached to multiple shafts. If you have a treadle connected to more than one shaft, the weight of that treadle is divided over each of the shafts it is connected to in much the same way four people picking up a box each only have to lift one quarter of the boxes weight.

If a treadle that is depressed raises a shaft/lam that was also holding up another treadle along with 3 other shaft/lams, the other 3 shaft/lams are left to carry the extra weight just like the 3 people left carrying the box when one person lets go. The "treadle weight" on these 3 shaft/lams has increased even though one of the treadles configured to lift them has not been depressed. This increase in weight increases the force trying to lift the shaft and if it is enough to overcome the "Warp Tension" and "Shaft Weight" forces the shaft will rise. It usually rises only slightly until the variable downward "Warp Tension" force increases enough to match the increased upward "Treadle Weight" force.

The Solution to Floating Shafts

The solution to the Floating Shaft problem is to simply adjust the loom mechanism to ensure that the downward acting forces overpower the ones acting upward to lift the shafts. Unfortunately this approach also increases the force required by the weaver to depress the treadle making the looms usable only be weavers with strong legs! 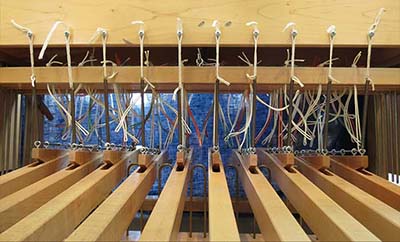 Instead of permanently increasing shaft weight, early Leclerc looms like the Nilart did it by providing a weights that could be selectively attached to the top of the shafts when a pattern that caused them to float was being woven. This solution addressed the symptom (the floating shaft) vs the problem (treadle weight) and meant a greater amount of force was required by the weaver on every pick that raised this shaft vs just the one that caused shafts to floats

Eventially Leclerc came up with a better solution by adjusting the treadle weight using a set of springs on the back of the loom. These Treadle Springs could be used to help support the weight of individual treadles applying just enough force to keep them from causing shafts to float, but not too much to make it hard for the weaver to stretch when they depressed the treadle. Treadle springs can be easily connected when there are Floating Shafts on just the treadles causing the problem or left disconnected when not needed.

Leclerc Multishaft Jack looms (ie. greater that 4 shafts) include these Treadle Springs on the back that can connect the treadles to the loom jack box. While some Jack loom manufacturers use elastic bands to deal with this issue, Leclerc uses more durable and long lasting metal springs. These can be selectively used to eliminate Floating Shafts to ensure that the shed for every pick is clean and large. Leclerc Treadle Springs are included on new 8 and 12 shaft Leclerc Artisat, Compact, Nilus, Nilus II and Colonial v2 jack looms and can be added to upgrade older Leclerc Jack looms without them.