There are two main treadling systems used on Leclerc looms. Treadles are foot controlled "levers" that are used to raise or lower the shafts to separate warp threads and create a "shed". This shed is used by the weaver to throw a shuttle through to insert weft yarn or other material between the warp threads. 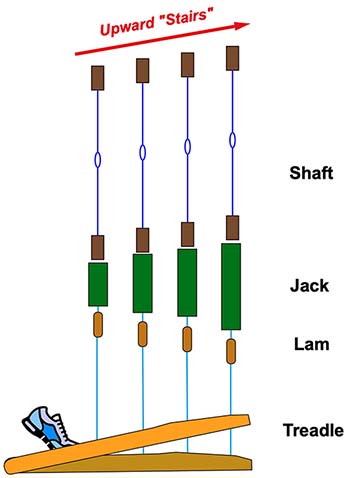 The most common system on Leclerc looms is "Front-Hinged" Treadles which consists of a simple set of foot operated levers attached to a pivot point at the front of the loom below where the weaver sits. The other end of these treadles are attached to lams above them which in turn are connected to either the shafts themselves (Counterbalance or Countermarch looms) or some sort of Jack mechanism that is used to raise or lower the shafts (Jack looms). The Front-Hinge design is used on most of Leclerc 4 harness models like the Fanny, Mira, Artisat, Nilus and Nilus II looms.

One of the inherent advantages of the Front-Hinge Treadle design is its ability to raise the height of each shaft attached to it by a different amount when it is depressed. The difference in height increases the further the shaft is from the weaver (ie. shaft 2 is raised a little more than shaft 1 and shaft 3 is raised a little more than 1 and 2). This is because the further the attachment point to the treadle from the pivot point the more that position on the treadle moves when the treadle is depressed.

The reason this difference is important is because of the need to have the top of the raised shafts to form what appears to be a set of rising "stairs" at the top of the loom. These stairs with the proper step height are critical in producing a "clean" shed, where the top warp threads form a line, as straight as possible, across the width of the loom making the shed as big as possible while stretching the warp threads as little as possible. If the warp threads connected to different shafts are at different heights at the top of the shed, where they go through the reed, the usable height of the shed will be lower than it could be.

The initial thought by many weavers is that the shafts should lift to a point where they are level but the diagram to the right shows why that is incorrect and explains the need for the different shaft heights. Shafts further towards the back of the loom need to be raised more to keep the warp threads parallel between the heddle eye of the raised shafts and the front Breast Beam. This is not a big issue in 4 shaft looms where only a few shafts are raised but in Multi-shaft looms (8 or more shafts) it is very important. The thickness and spacing of the shafts also affects this so it is not as bing an issue in small table looms with thin close shafts. 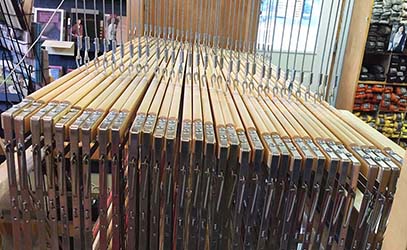 As you increase the number of shafts on a loom, producing a shed with the same height requires the weaver to apply more force to the treadles. As well as the extra force required to move more shafts, the shafts further from the weaver need to be raised higher which requires more force to deflect the warp threads a greater amount. Shaft 8 on an 8 shaft loom has to be raised higher than Shaft 4 on a 4 shaft loom to keep their warp threads parallel to the warp threads on raised Shaft 1. This is one of the main reasons Multishaft looms are harder to treadle than 4 shaft looms. The picture to the left shows the raised shafts of a 32 shaft Weavebird loom. 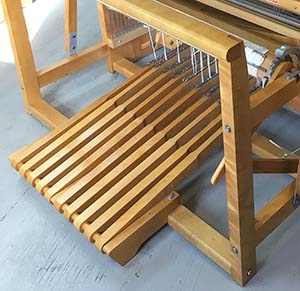 Treadles use physical leverage to reduce the force required by the weaver to move the shaft. The longer the treadle, the more the leverage it offers. The simple way to deal with the force required to move a larger number of shafts is to make the treadles longer. This can be done by moving the pivot point further away from the shafts and letting the weaver push down on a point with more leverage.

On front-hinge treadles, this means moving that pivot point further out from the front of the loom. On early Leclerc Multishaft looms like the Nilart and the Colonial, the treadles extended out under the weavers bench and increasing this further would make the loom much deeper and an awkward design. 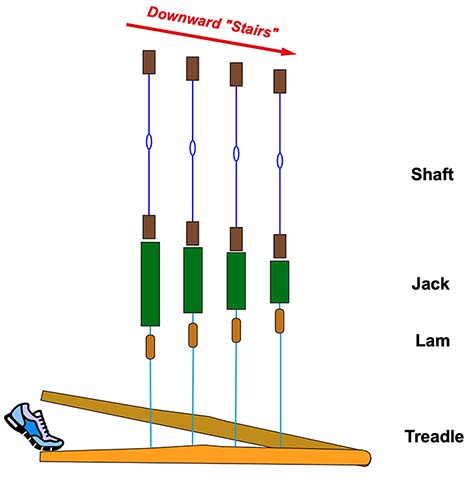 Moving the Treadle Pivot Point to the Back

The problem with this approach is that back mounted treadles do not inherently create the proper set of stairs that front-hinge treadles do. Shafts/Lams simply attached to the point on the treadle below them will be raised to produce a set of stairs but with the front shaft closest to the weaver raised higher than the shafts at the back.

To get the proper angle, the Treadle pivot point must be raised up higher off the floor and the treadles, starting off in a horizontal position, are pushed down by the weaver to lift the shafts. In this way, the back shafts are lifted higher than the front and a set of stairs in the proper direction (i.e upwards when viewed by the weaver) is created.

Another Front-Hinge Treadle advantage is the fact that the treadles go from being angled upwards when the shed is closed to level when the weaver depresses them. This means the loom designer can design the treadles and use fixed length treadle cords so that the shafts are all raised by the correct amount. When the treadle is fully depressed, the height of the "steps" in the upward shaft staircase is the right amount to ensure the raised warp threads are parallel producing a clean optimal shed. Having the treadle level at this point means that different weavers with different strengths will not be able to push the treadle farther down to change this step height.

On the back mounted or "Back-Hinge" Treadle design with the raised Treadle pivot point, two weavers with different strengths in their legs would be able to push the treadles down to different points. Changing the angle where the treadle stops would change the step size between the raised shafts and would affect the Shed. In addition, a small change in the depressed treadle height when it is at an angle affects the step height much more than a small change when the treadle is level as in the Front-Hinge Treadle loom.

The other problem is designing the treadles so that the treadle moves enough to raise the shafts the amount needed for the shed yet have the treadle angled properly in the down position so that the shaft step height is correct to produce a clean shed. To get the proper angle for both requires a very complicated treadle shape and causes problems when the treadle is is not depressed by potentially lifting shafts that it shouldn't.

A Treadle with a Rocker

Leclerc solved this problem by installing a short wooden "Rocker" on the Back-Hinge Treadle. The Treadle cords from the lams, instead of being attached to the treadle directly, are attached to the rocker which pivots in the center of the Treadle. By depressing a treadle and then changing the position of the rocker, the rocker angle can be independent from the angle of the Treadle when depressed but when not being used can be parallel to the treadle and the floor. 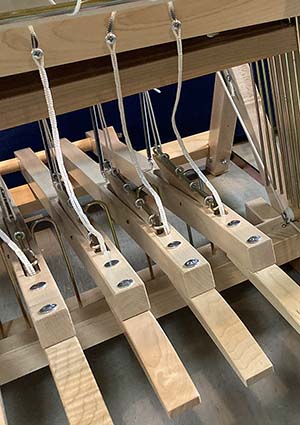 As mentioned above, to produce the cleanest shed it is important to get the proper step height on the set of shafts. This step height is determined by the angle the rocker is positioned to the floor when the shaft is fully depressed.

Note that because of the Rocker and Rocker Cord, the shafts on a Back-Hinge Treadle loom often rise at the same rate until the last moment when the Rocker Cord tightens up and pulls the front of the Rocker up. At this point the steps on the top of the shafts will appear and the shed will improve. When adjusting the Rocker Cord it is important to make sure the treadle is fully depressed after each adjustment to determine what the effect of the change is.

The diagram below shows the change in the height of the steps as the rocker cord length is changed:

Athough they look very similar to the Rocker Cords, the rear mounted Treadle Springs on Leclerc Multishaft looms perform a very different function. A full explanation of Floating Shafts can be found here.

Leclerc offers Back-Hinge Treadle versions of almost all of its Multishaft Floor looms. This includes the Artisat and Nilus Jack Looms, The Nilus II Jack and Countermarch looms as well as the 8 and 12 Shaft Colonial v2 Jack Looms. The Weavebird v2 Countermarch Computer Dobby loom also uses Back Mounted Treadles but a different mechanism is used to reduce treadling effort.