The Leclerc Gobelin loom is a vertical oriented tapestry loom modeled after those used in the famous Gobelin School in Paris, France. The warp is stretched between a cloth beam at the bottom and a warp beam at the top, both of which are tensioned using a ratchet and pawl system. In addition to achieve the very high tensions required in tapestry weaving, a set of two heavy screws located on either side of the cloth beam (pictured below right) allow a very high tension to be placed on the warp. Once the warp is tightened using the ratchet, the screws can be used to move the cloth beam down increasing the tension even more. To avoid bending of the warp rods with the high tension, they are mounted within a recess carved into the warp and cloth beams. 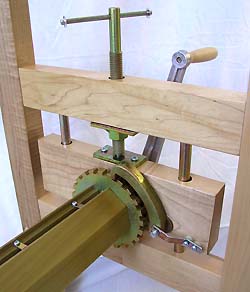 The vertical orientation of the warp threads allows the tapestry weaver to easily see the woven fabric up close or to move back and get a better perspective. The loom has a heavy duty frame with braces located in every corner for extra rigidity.

The Leclerc Gobelin loom is available in 36, 45, 60 and 100 inch weaving widths. While the loom is tall, it is designed to be very stable with the 60 inch version weighing over 160 pounds. 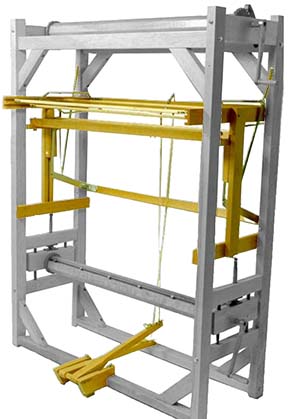 The basic version of the loom (shown above left) does not have shafts or a beater, but the warp can be manipulated using the weaver's fingers and string heddles. The same loom can also be ordered with a 2 shaft frame along with a beater mechanism to allow for conventional weaving of fabric and/or rugs as shown in the figure below right. The shafts move horizontally and are controlled by 2 foot treadles and the beater located below moves up and down. The standard Leclerc Reeds are used in the beater mechanism allowing for a wide range of warp thread thicknesses.

The enhanced version with the shafts and beater mechanism is available in 36, 45 and 60 inch widths only. The basic version of the Gobelin can be upgraded with a kit that adds shafts, treadles and the beater mechanism at a later date.

The dimensions and ordering information for the different version of the Gobelin loom are listed below:


Every Leclerc Gobelin Tapestry loom ordered from Camilla Valley Farm comes complete with the following extras to get you up and weaving immediately:

The basic Gobelin loom can be upgraded to the enhanced version with the addition of a special kit that includes the shaft, beater assembly and treadles. Leclerc also offers a choice of loom benches to fit all weavers and maximize their comfort while weaving. All of these options can be added to your Gobelin loom order or can be added to an existing loom at a later date.

If you are looking for a smaller Tapestry Loom, the Penelope II Loom may be a better choice!

Check out our Manual Section for downloadable assembly instructions for this and other Leclerc looms and weaving accessories. Information is also provided on upgrades and accessories. If you are not sure which Leclerc loom you own see our Leclerc Loom Guide to help identify the model.

Besides Leclerc's I Weave, You Weave we have a number of other books on this subject which include: Contemporary Tapestry: Shuttle Craft Guild Monograph 12, Tapestry Loom Techniques: Exploration of the 2 Harness Loom, Tapestry Weaving, Tapestry Weaving: A Comprehensive Study Guide and the videos Tapestry Weaving - Level I and Level II.