Leclerc Looms are renowned for supplying the highest degree of functionality in the handloom industry. The flexibility of the company's looms can be further enhanced with a number of loom options that can be ordered on new looms or can be added to enhance the functionality of existing ones.

While a Flying Shuttle is an indispensable option when weaving fabric with widths of 60 inches or more, weavers who find the process of throwing the shuttle at narrower widths difficult may also want to consider this option. The flying shuttle can also be used to increase a weaver's pick rate.

The Flying Shuttle Beater attaches to the standard beater assembly of most Leclerc Floor looms. It consists of a box to hold the shuttle at either end of the beater with a sliding "hammer". A cord is connected from each box to a wooden handle at the center of the loom that the weaver uses to move the "hammer" mechanism. By pulling on the cord, the weaver catapults the shuttle along the reed through the shed until it comes to rest in the shuttle box at the opposite end. After beating the warp and changing the shed, the process is repeated. The shuttle box at each end have a leather strap to catch the shuttle without damaging it.

A special Endfeed Flying Shuttle (EFS) with metal pointed tips is used in the flying shuttle beater. One of Leclerc's new Professional Flying Shuttles (6124-9000) is included with the beater option.The EFS shuttles use pirns instead of bobbins to allow the yarn to easily come off one end. The Flying Shuttle beater also includes a wooden Beater Handle that attaches to the Batten Handtree (the top of beater) making it easier for the weaver to grasp the beater.

The Flying Shuttle Beater attaches to the standard lower Batten Sley using the same screws as the Shuttle Race which must be removed to attach it. It then connects to the vertical Batten Swords the same way but using a longer set of bolts (included).

The change is not permanent and it and the Shuttle Race can be switched whenever the weaver wants to use one method of throwing the shuttle over the other. An additional Batten Sley can be purchased to make it even easier to switch from a regular beater to the one with the Flying Shuttle Beater by removing the need to remove the screws.

The Flying Shuttle Beater works on both the Underslung and Overhead Beater used on the Weavebird and Colonial looms.

Warp Faced Weaves like Bound and Rep Weave have always presented a challenge to handweavers, especially those using wider floor looms. Rugweavers find the hard beating required to pack the weft is tiring and can cause physical strain on the weaver's wrist and arms reducing the time they can spend at the loom.

The Weighted Beater option is designed for use with most Leclerc 27 to 60 inch wide floor looms. Identical in appearance to the standard beater mechanism shipped with the Colonial I, Fanny II, Mira II, Nilus and Nilus II floor looms, the Weighted Beater option adds from 4 to 13 pounds (1.8 to 5.9 kgs) to the weight of the beater assembly making it easier for the weaver to beat the weft harder.

This Weighted Beater Bar option is used to replace one or both of the horizontal Maple hardwood bars (battens) that hold the reed with similar wood battens containing hidden internal weights. The weights are designed in such a way as to not detract from the looms appearance, damage the loom or get in the way of the weaver. Distribution of the extra weight along the length of the beater, ensures uniform packing of the weft and ensures the battens will not break under the uneven stress found when external weights are simply attached to either end of the beater. Because the extra weight is distributed between the two battens, the amount of weight can be varied by using just one or both of the top and bottom horizontal battens. 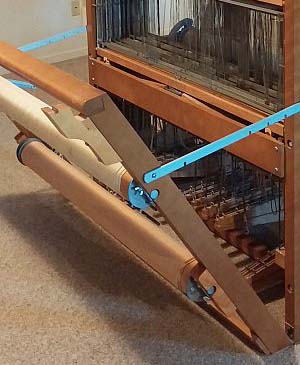 The Double Warp Beam option is a designed to assist the weaver in situations where the take-up is greater on some warp threads than on others. This ofen occurs when mixing different types or thicknesses of yarn in the warp. The differing elasticity in a long warp of this fashion makes it difficult for the weaver to get an even tension on the warp threads. With two warp beams, the different yarn can be wound on the second beam and the weaver can control the tension independently.

The extra warp beam is easy to install with brackets on the back posts of the loom, and comes with it's own friction brake which can be operated by the weaver sitting at the loom. On floor looms, this feature eliminates the need for the weaver to get up and walk around to the back of the loom to release the tension to advance the warp. The warp threads travelling to the second beam travel over a special secondary thread beam which mounts to the main thread beam and seperates the two warp threads. This beam and the mounting brackets for it are also included. The second warp beam is removable if not in use.

This option is available for most Leclerc looms when ordered new or as an upgrade option to existing looms. In addition, the Double Warp Beam is available as an option for Dorothy Table Looms. 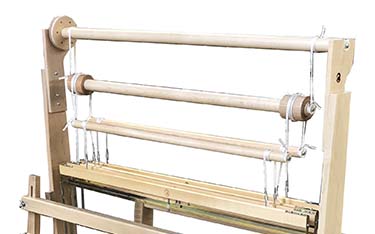 A Shed Regulator is an attachment for the Leclerc Fanny and Mira counter-balanced looms and is designed to help give the weaver a perfect shed on any tie-up. It is specifically focused on improving the shed for "unbalanced" weaves like Bronson, Waffle, Double and Circular Weave where the shed is created by moving one shaft against three going the other direction.

To explain the problem and how the Leclerc Shed Regulator makes weaving unbalanced weaves easier on their Counterbalance looms, we have put together this detailed description of the problem and the solution.

Unbalanced weaves on a standard counterbalance loom can sometimes result in a reduction in the size of the shed making it harder for the weaver to throw the shuttle accurately. While a balanced weave (two shafts up and two down) keeps the warp shed centered on the reed, the movement of 3 shafts in one direction tends to displace the upper and lower warp threads in that direction moving the shed itself up or down. This movement can cause a greater tension on the top or bottom warp threads as well as potentially allowing one to hit the the upper or lower edge of the reed. Either of these actions may cause the shed size to decrease.

The Leclerc Shed Regulator corrects this by automatically sensing an unbalanced distribution of the shafts and lifts or lowers the whole shaft assembly to keep the shed centered on the reed avoiding contact of the warp threads with the reed edges. On balanced weaves it is not activated and as no effect on the loom. Once installed, the Shed Regulator operates automatically and the weaver can switch from balanced to unbalanced weaves without having to make adjustments to the mechanism. If necessary, the Shed Regulator can be locked by inserting a small steel pin in the pulley at one end.

The Leclerc Fanny II, Mira II and Nilus II Counterbalance looms now come with the Shed Regulator installed as a standard feature but the feature can be added to older Fanny and Mira looms and full upgrade instructions are included. This includes the earlier "F" and "M" models. The kit comes with all the rollers and cords so it does not matter what upper roller mechanism the loom has. Note that the center roller looks slightly different from the picture to the left. Also, installation of this feature will increase the overall height of the loom slightly. 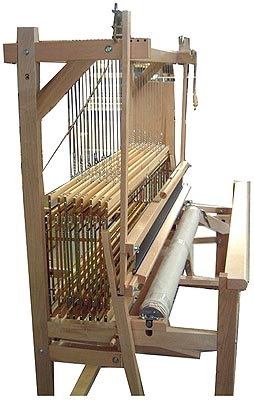 While Leclerc Floor looms come standard with an underslung beater mechanism, an overhead hanging beater option is available for the Colonial I, Weavebird and Colonial v2 floor looms.

The multiple sets of mounting holes in the loom frame allow the Hanging Beater mounting to be adjusted by moving it toward or away from the weaver and the metal brackets allow the height of the beater and reed to be modified. The hanging beater can be used with either standard beater battens or Leclerc's Weighted Beater Option. The same Hanging Beater Option is used to add this feature to the looms regardless of the weaving width.

Note that in the Weavebird picture to the left (click picture to enlarge), the underslung beater swords have not been removed. They can be folded out of the way to allow the weaver to switch back to an underslung beater or can be removed and stored away if not being used. 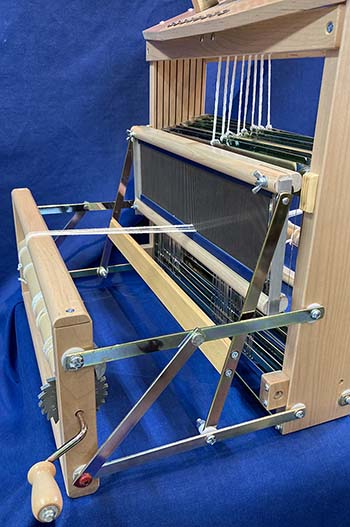 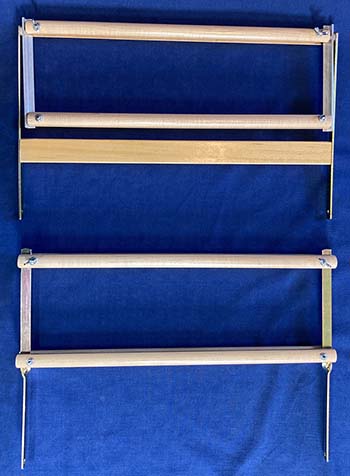 The standard beater mechanism for the Voyageur, Dorothy and Diana looms is similar to the underslung beater on a Leclerc floor loom. Two vertical metal swords are held together with two wooden horizontal battens that hold the reed. The whole beater pivots at the bottom where the swords attach to the loom frame and the reed is always held parallel to the swords.

An alternate "Swinging" beater mechanism can be ordered for these looms. The Swinging Beater uses a similar design as the standard beater but incorporates another pivot point that allows the reed and battens to swing in relation to the swords. This pivot point at the top of the beater allows the weaver to always keep the reed perpendicular to the warp threads regardless of the beater position. Watch the attached Swinging Beater video to see it in action!

New 2021 Improved Design! The current Swinging Beater design allows the upper Batten to be removed from the top to allow the Reed to be easily switched and to allow the Raddle to be installed in the beater for threading. 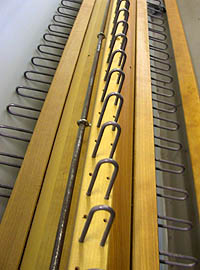 Leclerc Floor and Table Looms can be easily modified to support Sectional Warping with a low cost conversion kit to convert the Warp Beam to a Sectional Warp Beam.

Click Here for more information on this option as well as a selection of other sectional warping tools including tension boxes and counters.

Make your portable Leclerc Compact weaving loom even more mobile with this set of wheels!

This set of 4 wheel blocks attach to the legs of any Compact loom to allow it to easily roll in any direction. The 1-1/4 inch hard rubber wheels are angled in such a way that they do not touch the floor when the loom is being operated, but are automatically activated when the loom is folded up for transport. When the loom is folded out in the weaving position, lifting one breast beam a few inches will engage the 2 wheels on the opposite side of the loom making it easy to move as well.

These 4 wheels have 360 degree ball bearing swivels and mount easily to the loom legs with two screws. Drilling with a 1/8 inch bit (not included) is required and full installation instructions are provided. 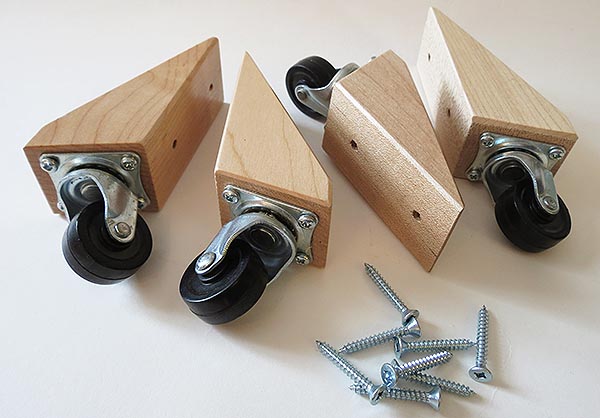 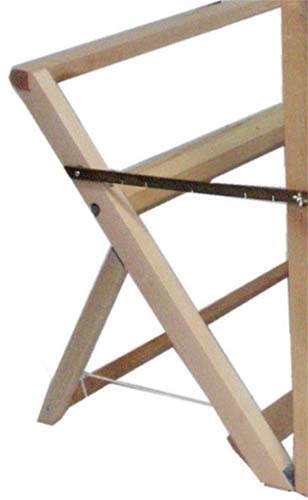 This set of fold out legs are similar to those found on the Nilus II looms and can be added to the back of a Fanny, Nilus, Colonial and Colonial I floor looms. They extend the footprint of the loom increasing stability when the weaver is beating very aggressively. The hinges attach to the looms folding back posts on either side and can be folded in to give the loom a narrower depth for storage and Texsolv cords are used to adjust the positioning of the legs. Note that the legs will increase the depth of the loom by a few inches when folded.